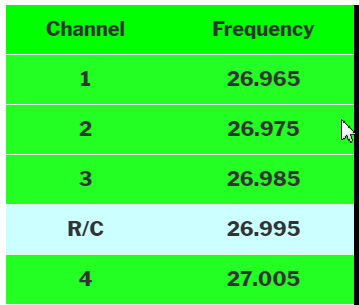 What is a table (grid) of frequencies?
Why is a frequency grid required? Why I can’t use frequencies directly?
How to use the frequency table?

What is a table (grid) of frequencies?

Table (grid) of frequencies (Frequency Chart, Table) is a table of correspondence of a certain frequency to the conditional channel number of a standard frequency grid.

Why is a frequency grid required? Why I can’t use frequencies directly?

ou can use the frequencies, but this is quite inconvenient – you need to remember 5-6 characters for each single frequency. Therefore, in two-way radios (land mobile radios, walkie-talkies) of the Citizens Band, we use the Channels – conditional one-two-digit numbers. They are easier to remember and tune. Sometimes, in addition to the channel number, a letter of the Latin alphabet (“Band”) is used. In this case, the channel frequency, for example, D1 is not equal to the frequency of the channel E1; so these are independent channels.

How to use the frequency table?

To use a simple standard (one-dimensional) frequency table, it is enough to compare the channel number and frequency. For example, emergency communication channel 9 corresponds to a frequency of 27.065 MHz (27065 kHz) – see table 1.
To use a frequency grid with a Band letter (two-dimensional table), you need to select the column BAND with the desired letter and the row with the channel number (channel). Their intersection will indicate the frequency. For example, in the transceiver Alan-78 +, channel D19 corresponds to a frequency of 27.185 MHz. In many countries of the world, this is the “call” frequency – see table 2 and notes.

1. In most countries, a frequency plan for the civil band of 27 MHz (CB, “Citizens Band”) has been approved, containing 40 standard channels with numbers from 1 to 40 (harmonized by the FCC (America) and CEPT (Europe)).

3. Channel 9 with a frequency of 27.065 MHz (highlighted in red) is an emergency channel and is usually tapped by government rescue services.

4. Channel 19 is considered the common channel of the call (after establishing communication on this channel, the interlocutors usually switch to another channel for communication). In addition, in a number of countries, this channel is considered the channel of truckers and travelers. However, in some countries truck drivers often use other channels, for example: 5 AM in Italy, 13 AM in Greece, 15 in Russia. These channels are highlighted in yellow.

6. Some countries (e.g. Poland, Kazakhstan and Russia (officially)) use a frequency grid with frequencies reduced by 5 kHz. Thus, there the frequency of channel 19, for example, will be 27.180 MHz. In some multi-standard radios (for example, Luiton LT-298), the frequency shift is carried out by selecting the country code (PL), and in some – by pressing a special button.

7. In some countries, not the only standard, but additional frequency bands are allowed. Most often, they are switched by changing the channel letter (BAND). The correspondence of the frequencies of the channels in such cases is indicated in the second table (see below). In this case, most often as the main (central) band is Band D, the channels of which correspond to the standard grid of 40 channels. In walkie-talkies of different manufacturers, letters may differ (see the names in the right column).

This article includes links to the examples of devices, which are discussed, on the informational website, on Amazon marketplace, and/or online store ProMarket. You may use them if you are interested to get more detailed information or you want to buy something you like with EU delivery.